We are seeking a volunteer, preferably a TAS member, who is on the electoral register in the Borough of Middlesbrough and who would be willing to write/email to the Planning Department, under guidance from TAS and the Council for British Archaeology. A request can be made directly (a Council response is usually required within a stated timeline) or under the Freedom Of Information Act (requiring a 20-day response).

The purpose is to request purely factual information about the nature of archaeological evaluations (and their results) that have taken place, or which are planned, in relation to development activities that are either approved/underway or in the application/appeals process. We note that where English Heritage have been involved, they tend to focus on the built heritage structures and not the archaeological landscape (pers comm).

The four focus areas are:

“The David Wilson homes project at Grey Towers Farm, Nunthorpe, was opposed by local campaigners but the scheme was given planning consent by Middlesbrough Council’s planning committee. A 3,000 signature petition was raised against the plan. Campaigners objected to greenfield land being used for housing instead of brownfield sites. They also feared it would have an adverse impact on infrastructure, such as congestion.”
— Evening Gazette 06-Mar-2013 »

Since the Council’s withdrawal of funding from Tees Archaeology (the regional professional archaeology advisory and HER service), Middlesbrough Council’s planning process (in relation to the National Planning & Policy Framework − NPPF, and Historic Environment Record − HER maintenance) has not been publicly visible. By writing to the Council we aim to learn what archaeological and heritage-related activities they have been undertaking in areas of commercial and residential development. This is not about positioning, only about fact-gathering.

“In these very challenging times of austerity I think we all empathise with the many organisations − governmental or otherwise – who must make extremely difficult choices in the face of present and future constraints on their funding. However, heritage is a fragile and irreplaceable component of our shared environment, our sense of place, social well-being and economic success. It’s the role of organisations, such as TAS, regional and national, to persuade the decision-makers that Heritage and Archaeology can contribute real, tangible value across communities through footfall, tourism, inclusive participation and education. Once it’s gone, it’s gone forever.” — TAS Chair 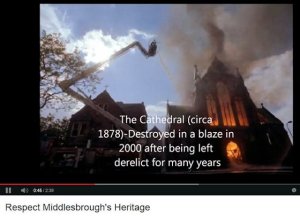 “Over the years Middlesbrough has lost some fantastic buildings. Everyone is in agreement that Local Government has been hit hard with cuts to their budget. However, I believe these buildings and conservation areas are regarded as a liability not an asset and are demolished or sold off when alternatives should be sought after to ensure these places are protected for future generations to enjoy. This collection of photographs shows buildings still very much talked about and missed by residents of Middlesbrough.”

If you are interested in writing to the Council, with support, please email teesarchsoc.news@gmail.com or telephone the Chair on zero-two-zero-eight 962 02 one-one.

TAS is an affiliate member of the Council for British Archaeology, CBA North and CBA Yorkshire.

Disclaimer | While every effort has been made to provide accurate information, neither the writer nor TAS shall be responsible for any errors or consequential damages.