At a time when a great deal of archaeological activity is decided upon by the interests of developers and planners less opportunity seems available for research with the hope of discovery. As some archaeological societies and local archaeology groups are finding there 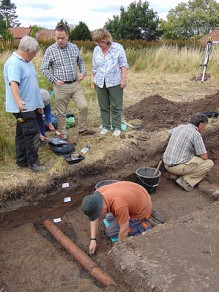 are opportunities for volunteer led archaeology to make discoveries about the past. In this talk I would like to present results of two projects from the Vale of York, south of York at Cawood and North Duffield. In both instances local history and archaeology groups have obtained funding to carry out excavations, answering questions that they have about the past in their historic landscape. In both instances the work was supported by the Heritage Lottery Fund.
In this talk Jon will outline work carried out on the Iron Age landscape around North Duffield situated on the western margins of the river Derwent. At North Duffield evidence for Iron Age enclosures and settlement were revealed. The latter was represented by an unexpectedly large round house. At the second site at Cawood, some 10 miles away on the west bank of the river Ouse, Jon will tell us about a project, evaluating the deposits on a moated manorial centre located alongside the Arch Bishop’s palace. In both cases the community teams have successfully completed archaeological projects. But as part of the community they have found exciting and interesting ways to involve as much of the community as possible. The result of their work is not only a better understanding of the past around them but also inclusion in the management of the historic environment where they live. 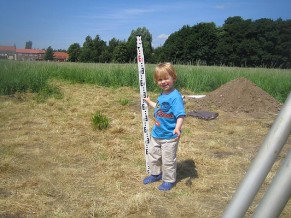 About the Speaker
Jon Kenny is an independent community archaeologist working

in Yorkshire based in and around York. He worked in local government housing until going to study archaeology at the University of York where he obtained a degree and a Masters in Archaeological Heritage Management. Jon completed his academic career by obtaining a doctorate at Lancaster University in 2001. Following time working as a project manager with the Archaeology Data Service at the University of York he became Community Archaeologist at York Archaeological Trust. At YAT Jon was involved with many community projects supporting local groups and involving people from all walks of life in different aspects of archaeology. Jon was also instrumental in ensuring that a volunteer team was involved with the multi million pound excavation at Hungate in central York. After 9 years with YAT Jon set up his own business, continuing to make archaeology accessible to all. In November 2015 Jon was awarded the prize as Community Archaeologist of the Year by the CBA and Marsh Christian Trust. It was Jon’s work with North Duffield and Cawood in particular that led to this award.
Website: www.jkcomarc.co.uk
Blog: https://jkcomarc.wordpress.com/