An exciting joint project between TAS and Tees Archaeology

“I see this as a great opportunity to record and research the area of Teesside during this conflict, which was well known to a remarkable  generation of people. Many survived into old age but so rarely talked about the difficulties they must have experienced.” – Chris McLoughlin, TAS Member

The First World War on Teesside

During the First World War the region played host to a number of military sites. In Stockton Royal Navy engineers designed a Y Station, an acoustic listening post to pick up the communications being sent by German ships and Zeppelins. Its location, some way from the coast, is likely to have been defensive, taking it out of the reach of any bombardment by German naval vessels. Other installations survive at Redcar and Boulby.

Aircraft based on Teesside are known to have had at least one success. On the night of 27 November 1916, Zeppelin L34 was shot down by Lieut. I.V. Pyott of Seaten Carew’s Royal Flying Corps (RFC) Station. The air bases near the Teesside coast were intended to defend against German submarines and surface vessels and to intercept raid by Zeppelins. 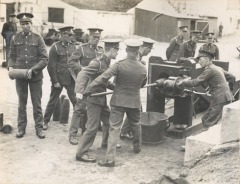 The Army also had a presence on Teesside. Training camps and barracks could be found across the region. many of these would be simple groups of tents, but some, such as the camp at Dalton Piercy, saw soldiers living in wooden huts. In Port Clarence there was a prisoner of war camp—the exact location has been lost over time.

At Teesport the Royal Navy has a submarine base for coastal patrols. The 10th Flotilla comprised eight submarines and their depot ship, HMS Lucia. The submarines of the 10th Flotilla were designed to operate “overseas” rather than performing coastal protection duties.

This joint project between TAS and Tees Archaeology will record the archaeological evidence of the buildings, camps and other structures used during the First World War. Documents from the War provide a good starting point, and old maps and aerial photographs can give us a better idea of where sites were. By visiting the sites we can understand more about their history and physical character. Site visits also help to determine what condition the site is in and what needs to be done to preserve it.

Many of the sites still exist. For example, the Army used various houses and hotels in the area as sleeping quarters for troops. Other sites were never much more than a field which, in the case of Kirkleatham, the Royal Navy used as a mooring post for airships.

How to get involved

There is a great deal more that we would like to know—and record—about Teesside during the First World War. If you have any information to share, please get in touch using the contact details below. If you would like to be kept informed about the project and discover opportunities for involvement, please email teesarchaeology@hartlepool.gov.uk and keep returning to this web page for updates.

♦ Please share this with your friends—the volunteer team is growing!