This outreach event featured archaeological activities ongoing in the North East. The full day lecture series was accompanied by a number of stands that were run by the societies within the area. Teesside Archaeological Society had a stall which featured the documented First World War sites at that stage. These were showcased through a series of images, posters and leaflets which were distributed to the public. 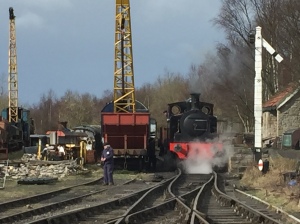 This event was a collaboration of Tanfield Railway and the Durham Pals Living History Group. Andrew’s House station featured First World War posters and a recruitment office. Men and women in period uniforms and civilian clothing complemented the authenticity of the weekend. Marley Hill carriage shed featured displays from both national and local 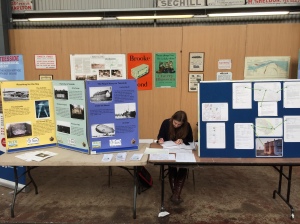 organisations on the impact of the First World War in the North East and the rest of the country. Teesside Archaeological Society were lucky enough to have a stand at this event featuring the sites within the north east that had already been recorded. Other noticeable stands included the, ‘Durham at War project’. Although exact figures cannot be ascertained, it was recorded that over 600 people had tickets to ride the steam train from the station we were located at. 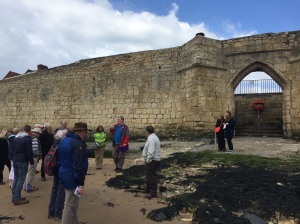 This free guided walk explored the defensive sites across Hartlepool’s historic headland and was led by Robin Daniels (Tees Archaeology). The tour addressed those sites that were important in the war effort, but also touched upon the historical sites from the medieval period. In conjunction with the guided walk, a guided tour of Hartlepool’s Heugh gun battery site, ‘The Heugh Gun Battery’, was also included for the volunteers.

Robin Daniels (Tees Archaeology) and Phil Philo (Dorman Museum; Captain Cooks Birthplace Museum) led this free guided walk. The guided walk took volunteers on a journey across Marske visiting the First World War sites in the area as well as the field systems that were transformed into defensive structures that were used as a training ground for the army.